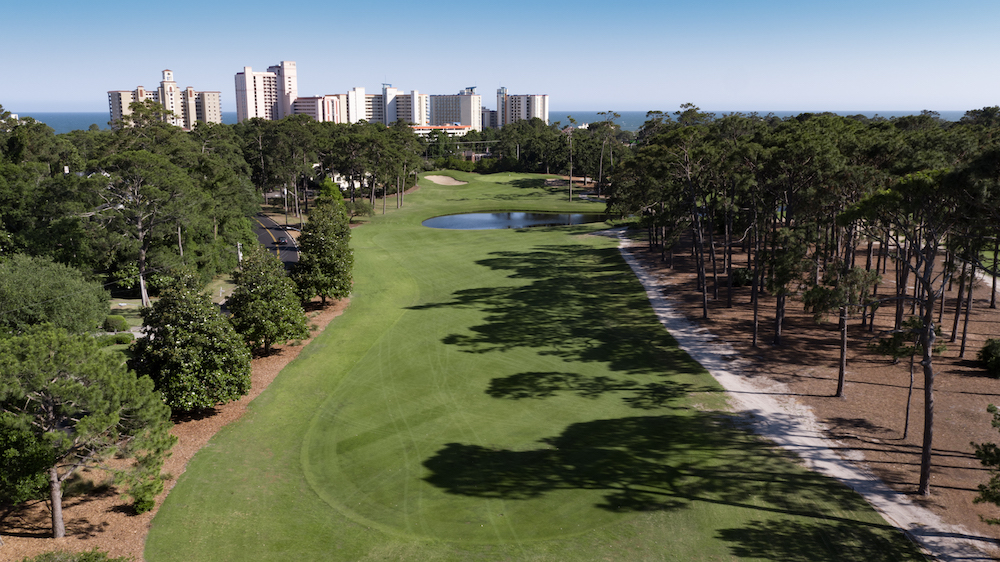 Pine Lakes – the first course built in Myrtle Beach – embraces golf’s historic past with a par-70 layout that is traditional yet challenging. One hole perfectly encapsulates this balance: No. 14. Here’s what you can expect to encounter on Pine Lakes’ second-most-difficult hole when you play it with MyrtleBeachGolf.net:

No. 14 is a long, straight par 4 measuring 438 yards from the back tees. The challenge from the tee box is to hit one far and, most importantly, straight, as out of bounds comes into play quickly down the left side while a sizeable forest, which blocks players’ views of the green, guards the right side of the fairway.

Meanwhile, another prominent feature of the hole is the “U”-shaped elevation change, with a severe downhill slope off the tee, to a second shot played into a raised green complex. If you don’t hit it far enough off the tee, you won’t make it to the bottom of the “U,” leaving an awkward downhill lie for your second. But be careful! You don’t want to hit it too far off the tee either. There’s a small lake placed some 100 yards before the green.

With an optimal tee shot played to just before the lake at the bottom of the “U,” a mid- to short-iron into the elevated green awaits. Barring some sort of real disaster (don’t hit it fat!), the lake isn’t a huge factor for the second shot, but you’ll want to avoid the two bunkers which guard the green, one to the left and right.

The green itself is a tricky one, undulating and sloping prominently back toward the lake and the bottom of the “U.” Your best chance of finding a straight, makeable putt is to fit it in there just below the flag, but not too far below or your ball may roll off in front.

The challenge at Pine Lakes’ 14th hole is traditional and complex. It’s a great hole you should look forward to on your next MyrtleBeachGolf.net vacation. 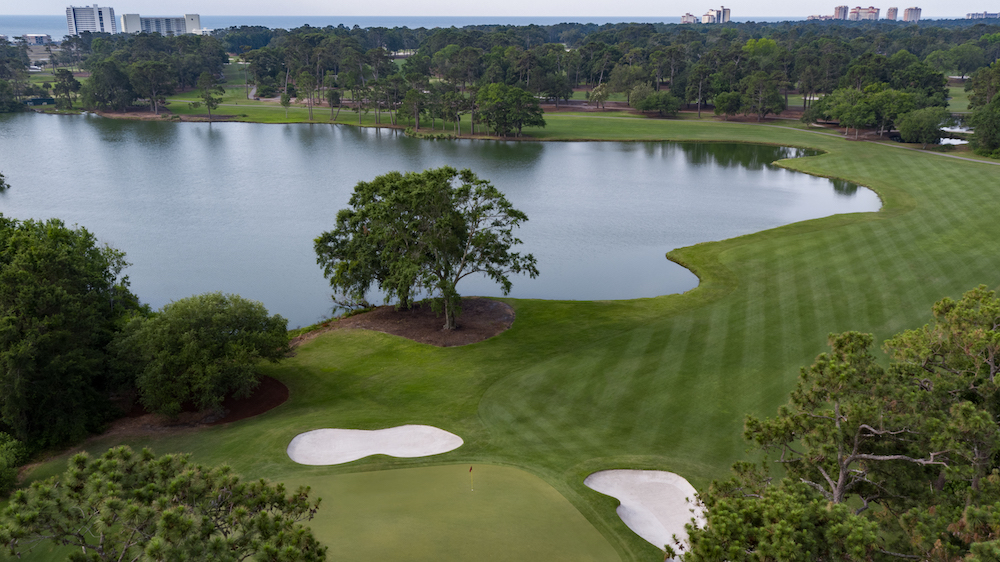 The Dunes Golf & Beach Club: As Good as It Gets in Myrtle Beach

A legendary masterpiece on the shores of South Carolina, The Dunes Golf & Beach Club is the second-oldest course in the Myrtle Beach area and often ranks as the No. 1 facility on the entire Grand Strand. With more than 400 properties to his credit and work, designer Robert Trent Jones created something special at The Dunes Club, building a course with a name that speaks to the incredible piece of land on which it lies, and fostering a legacy of high-level championship golf dating back to its founding in 1948. Put simply: A chance to play The Dunes Club on your next MyrtleBeachGolf.net vacation is one you won’t want to pass up!

Beautifully sandy dunes that create naturally rolling fairways and ever-maturing oaks that gracefully frame each hole set the stage for The Dunes Club’s staggeringly creative layout, with numerous signature holes that challenge even the best players in the world. Coined “Alligator Alley,” the three-hole stretch of Nos. 11, 12 and 13 quite possibly is the most famous stretch of holes in Myrtle Beach. Meandering along Lake Singleton and the Singleton Swash, these three holes are absolutely remarkable and sure to leave a lasting impression. Here’s why:

The dogleg-right, par-4 11th extends into the Singleton Swash with mature oaks overhanging the green, while the intimidating par-3 12th, with its forced marsh carry, plays into a wide but shallow green that is difficult to hit in regulation. Finally, the par-5 13th stretches to a ginormous 640 yards (from the back tees) and has received recognition as one of the best golf holes in the entire country. It is nicknamed “Waterloo” because Lake Singleton hugs the entire right side of the hole, with a forced carry second shot and likely a mid-iron third into a two-tiered green complex.

Few courses in existence utilize natural terrain the way The Dunes Club does, and the result is beautifully special – so special that the course has played host to numerous professional events, including six Senior Tour Championships, one Women’s U.S. Open and several PGA TOUR Q-School finals.

The Dunes Golf & Beach Club is truly a remarkable experience for those who choose to vacation with MyrtleBeachGolf.net!