When it comes to course selection, a long-awaited spring golf getaway is no occasion to mess around with anything less than a sure thing. That’s where our Elite Package can make your planning a breeze.

Play at least three rounds to take advantage of this deal’s special pricing, or go as many as five. Your choices are among five designs that each brings its own special flair to the proceedings. They include:

Arcadian Shores – Rees Jones’ first-ever solo design resides in “The Golf Capital of the World,” and what better way to test the handiwork of the man known worldwide as “The (U.S.) Open Doctor” than to take on this design? It has now completed several upgrades, including a brand-new clubhouse, new cart paths and new greens – taking an exceptional design concept to another level.

Arrowhead Country Club – Tom Jackson, whose name appears on several additional designs in the area, teamed up with U.S. Open champion Raymond Floyd to deliver a 27-hole masterpiece nestled along the Intracoastal Waterway. Along with three 9-hole layouts that each present its own distinct challenge, Arrowhead is renowned for its exceptional conditioning on a year-round basis.

Prestwick – Following in the footsteps of his Father, P.B. Dye has become one of games most renowned architects. You get the ultimate combination at Prestwick, where Pete and P.B. Dye have created a links-style masterpiece containing several of their trademark elements, including bulkhead-protected greens, stairway bunkers and starting and finishing holes that border a large lake.

Tidewater – The Ken Tomlinson design gained a quick reputation as “The Pebble Beach of the East” upon bursting onto the Grand Strand golf scene with a visually stunning display of golf holes – many of which play scenically through and along the salt marshes of Cherry Grove.

The Jones Course at Sea Trail Resort – Rees Jones gives you another chance to experience his design genius at this popular track. Players of all skill levels will enjoy an exceptional round on a straightforward golf course with typical Jones mounding and wide fairways surrounded by water, which comes into play on 11 holes here.

Book early to save up to $50 per round for spring play. Click here to learn more, and let us know when you want to experience the Elite!

The Myrtle Beach area has its fair share of courses featuring the leading names in golf course design – including the likes of Pete Dye, Tom Fazio, Arnold Palmer and Tom Jackson, to name a few.

And when it comes to the game’s greatest all-time player, Jack Nicklaus, you have two course options that bookend the Grand Strand: Pawleys Plantation to the south in Pawleys Island, and the Golden Bear’s offering along the north end at Long Bay Club – the focus of our course spotlight here. 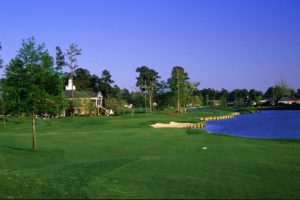 Along with its sister course, Long Bay Club is celebrating its 30th year on the Myrtle Beach golf scene. Long Bay continues to shine as a shot-maker’s course, and is a popular inclusion in golf vacation packages for its unique challenge and visually stunning presentation.

The “eye candy” is readily apparent at such holes as No. 10, sporting a fairway surrounded by waste bunkering that’s flanked by dramatic mounding, and leads to an elevated green; No. 7, a sprawling par 5 that wraps around a large lake and presents a compelling risk-reward option for your second shot; and No. 13, the island green par 3 that offers little room for error as you attempt to fly it to the putting surface.

No. 13 is just one of many holes at Long Bay that define Nicklaus’ approach here compared to Pawleys Plantation. While its sister design is fairly tight throughout and squeezes you more off the tee, Long Bay offers more room to let it fly with your driver – but places a premium on your approach shots. Come ready with your short game here, as high-trajectory shot making is in high demand here.

Our Captain’s Choice Package is an easy way to include Long Bay Club with several nearby options for an outstanding golf getaway, including Farmstead, Glen Dornoch and Grande Dunes Resort Course among others. Click here to view available tee times!